So tonight, for the third week in a row, I’ve missed #5MinuteFiction. It was a fun prompt too: “Your entry for this week must be focused on the theme of babies switched at birth, and one of them is special in a very unique way. (this baby may have magic powers.) Anyway, there are some fun stories, so check out the finalists at Wendy’s site and vote for your favorite story!

The first week was for a meeting which was necessary. Last week I had an “all expenses that will have to be paid by me” trip to the emergency room. This week was just fun! My wife and I celebrated 34 years and 11 months at the ball game. Ok…so it wasn’t really the occasion – it was her college’s half-price night at the game. We got the best seats we’ve ever had – except the manager for the home team stood between me and the hitter so I didn’t get pics – but that made it more fun. We had lots of fun talking with the couple on the end of the row. Turns out she was a Cubs fan having grown up in Iowa. I took a “shadow-selfie” just as we got there. I think it’s more artistic than a normal selfie! (#shadowselfie) 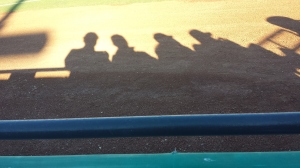 Later, the people next to us left for a bit. We thought they had left for good and the mascot (Sammy the Seagull) came to sit next to us. I had to take a selfie of that! I don’t do selfies normally and I took an artistic one and a normal one all in one night! When the couple came back when the mascot actually went back to work, she looked at me and said, “I was coming back and there was a bird in my seat!” She looked around and then said, “nope, he didn’t leave anything else.” 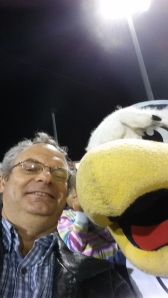 My tweet of that picture made the big screen. Later in the game, we made it to the big screen two more times. We were loud and raucous and had a lot of fun. I don’t think most people watching us would believe it if they were told that I don’t drink alcohol. They would wonder how it’s possible to act so crazy without help. Of course, as my amazing wife said, “He’s rubbed off on me and I don’t get embarrassed by his actions anymore. I’m joining in!” My report tomorrow won’t be very good….but tonight was worth it!

All donations will be used to support the upcoming mission trip my daughter, my wife and I will be taking to Rwanda.

I have been fortunate to win this trophy many times. Make sure you check out Wendy's site and enter your writing also!